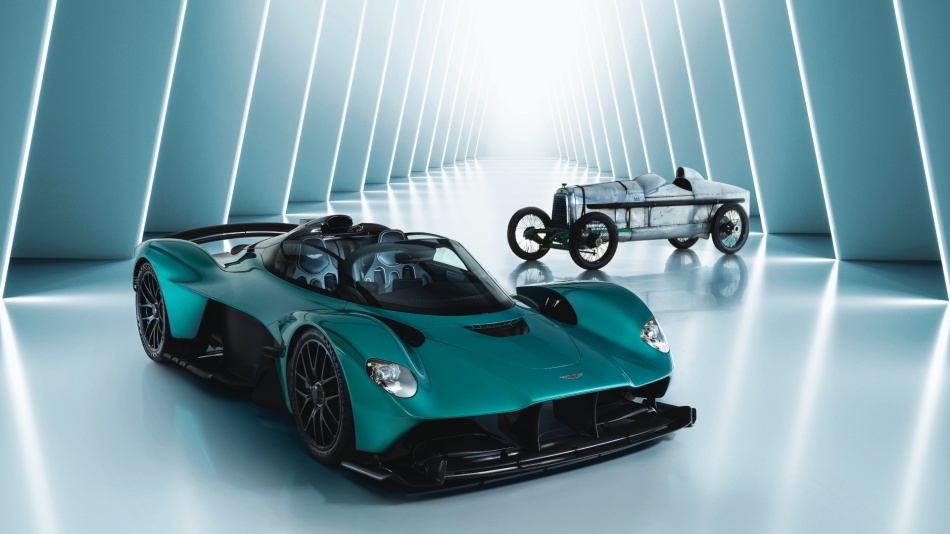 It’s a scene to relish: an historic Aston Martin racer meeting the future of the marque in a unique photoshoot to celebrate the iconic British automotive brand’s 110th anniversary.

This weekend, on January 15, 110 years ago, founders Lionel Martin and Robert Bamford officially formed a partnership that would lead to the first Aston Martin car, and more than a century of  high-octane racing success.

To mark the anniversary, one of the brand’s oldest surviving racing cars, the record-breaking 1923 Razor Blade, met the astonishing Aston Martin Valkyrie hypercar.

One of the earliest cars to be specifically designed with aerodynamics in mind, the ground-breaking Razor Blade took numerous class records at Brooklands in 1923.

A collaboration between Aston Martin and Red Bull Racing, the Valkyrie is one of the most advanced and powerful road cars ever built.

Powered by a 6.5-liter V12 engine paired with a hybrid powertrain, it produces a combined output of 1,160 horsepower. It also has a lightweight (1,030kg) design, with a carbon-fibre monocoque and bodywork. This results in a formidable power-to-weight ratio and a top speed in excess of 250 mph.

With only 150 road-going versions and 25 track-only versions in existence, the Valkyrie is one of the most exclusive supercars on the market. All units are already sold out and it’s considered a highly desirable collectible item.

To mark this momentous year for the brand, Aston Martin will launch a new limited model, yet to be announced…

By way of celebration, Aston Martin will launch a new limited model, details yet to be announced. What we do know is fans will have a chance to see the newcomer at the British Grand Prix at Silverstone, Goodwood Festival of Speed, and Pebble Beach Concours d’Elegance.

Amedeo Felisa, Chief Executive Officer of Aston Martin Lagonda, said: “In 1913 Lionel Martin and Robert Bamford came together with a shared vision of racing cars and using learnings from the racetrack to push the boundaries of automotive innovation.

“110 years and little over 110,000 cars later, that spirit continues. Our 110th year promises to be just as exciting as our first, as we turn a new chapter in Aston Martin history with the launch of our next generation of sports cars and the reveal of an extraordinary special model later this year that will celebrate this unique milestone.”

Love is in the air… and so is the sweet, sweet scent of champagne. There’s no better occasion to pop open a bottle of bubbly than Valentine’s Day, so, whether you want to give the perfect luxury gift, pair with a romantic meal, or simply raise a glass to love, we’ve got you covered with…

Timex has issued a limited edition of the Giorgio Galli S1 Automatic 38mm. Conceived by Giorgio Galli, the brand’s Milan-based design director, this black dial gold case edition follows the S1 Automatic 38mm released a year ago. Dressy but not ostentatious, this elegant update is a luxury timepiece priced at less than you might imagine.…

Is there anything as dreamy as a tailor-made trip, designed to your exact specifications, and offering an experience like no other?  The House of DreamMaker doesn’t think so – and we’d be inclined to agree.  A unique luxury travel boutique, The House of DreamMaker specialises in creating truly one-of-a-kind, first-class holidays, for those looking to…