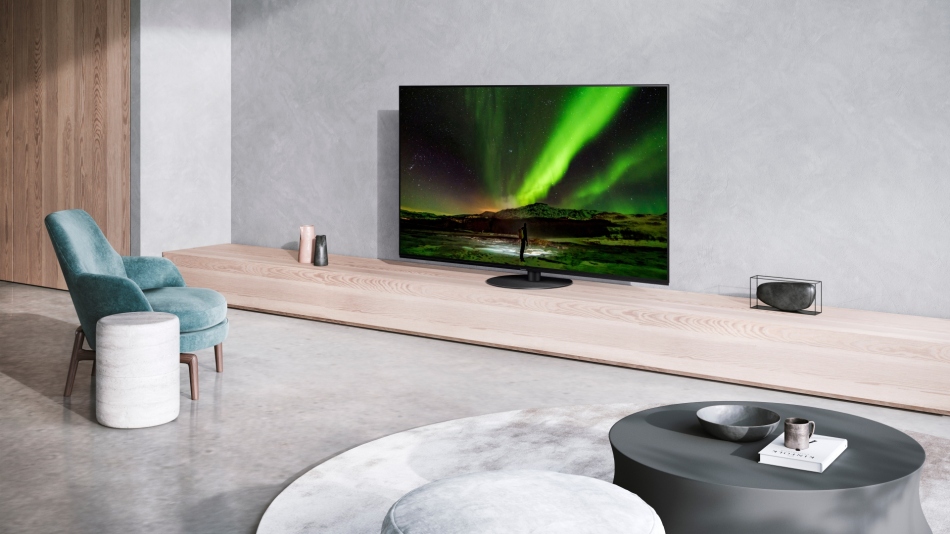 Panasonic has taken the wraps off its 2021 TV range, with screens designed to deliver the best performance for home cinema fans, gamers and armchair sports enthusiasts.

Earlier this year, the company previewed its flagship JZ2000 OLED. Now we know there with be three models positioned below it:  the JZ1500 (pictured above), JZ1000 and JZ980 series. All three will be available in 65-inch, 55-inch and 48-inch sizes.

One announcement we’re cock-a-hoop about is that the brand’s high performance Master HDR OLED Professional Edition panel, used in the JZ2000, will also be available on the step-down JZ1500. This will be welcomed by those that don’t need the fancy Dolby Atmos sound system built into the JZ2000 model.

It’s worth noting though that this high-brightness Pro Edition panel is only available on the 55- and 65-inch JZ1500 models, not the new 48-inch small screen.

One screen size missing from the 2021 Panasonic line-up was a 77-inch model. Panasonic explained: “Total volume for large inch sizes is comparatively small. Although we are always watching the market, we are prioritizing our resources on popular screen sizes…”

All OLED models benefit from colour tuning by leading Hollywood colourist Stefan Sonnenfeld, to ensure their cinematic image preset is as close a match as possible to the reference monitors used in colour grading suites, and feature the brand’s new HCX Pro AI processor.

To further stress their cinematic credibility, the new screens were endorsed at their launch by legendary director Michael Mann, and Godzilla Vs Kong director Ben Seresin.

Micheal Mann said: “I try to calibrate the precise mood that visual imagery has the power to invoke within people. The Panasonic OLED delivers, superbly, exactly what we crafted in weeks of colour timing with Stefan at CO3 to generate the effect time after.”

Ben Seresin said: “The colour accuracy of Panasonic’s OLED TVs perfectly match what I see in the editing bays as a part of the creative process, and in my opinion, deliver the most cinematic home experience.”

Other features include an Auto AI picture mode, which optimises image quality automatically based on whatever you’re watching, as well as Game Mode Extreme, which reduces latency for better fragging.

The design of the 2021 range is elegantly minimalist. “We believe that our TVs should exist in harmony with our living spaces,” we were told, “to allow viewers to be fully focused on their favourite content. Our designers were strongly inspired by Japanese architecture – static, silent and still. We call this Architecture of Serenity. Inspired by the same Japanese philosophy, we will be introducing a brand new remote control in 2021, seamlessly fitting into your living room environment. It has actually been modelled on the rounded shape of traditional bowls, which make it ergonomic and comfortable to hold.”

The top-end JX940 line is aimed at both sports fans and joystick jockeys. Here the new HCX Pro AI processor, is partnered with Intelligent Clear Motion which smooths out fast action, to remove judder.

Tár and The Banshees of Inisherin were the big winners at the 43rd annual London Critics’ Circle Film Awards. Tár took three major awards at a star-studded ceremony at The May Fair Hotel, London, on Sunday night.  Todd Field’s film was named Film of the Year, while Field and Cate Blanchett were named Director and…

Ted Lasso is heading back on the pitch with its third season this spring, streaming exclusively on AppleTV+ – and it’s just the tip of a new slate of new and returning original series, premiering globally on the service through spring 2023. Ted Lasso – Premiere date Spring, 2023 “I do love a locker room.…

Sky has released a new trailer for its upcoming western epic Django, and we’re so excited for the show we’ve spent the day polishing our spurs in anticipation. Debuting on Sky Atlantic and streaming service Now February 17, and directed by Francesca Comencini (Gomorrah the Series), the ten-part series is loosely based on the 1966…