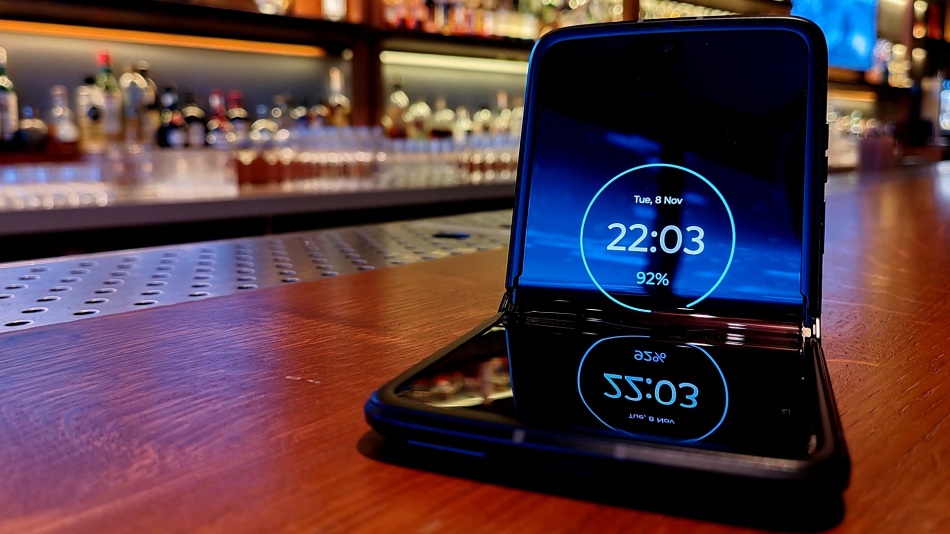 If you’re in the market for a high-spec Android smartphone that oozes style, take a good look at the new Motorola Razr.

The new designer Android smartphone was launched this week at Nobu Shoreditch, London, where its foldable nature was emphasised by a performance from a contortionist. We’ve had hands-on (with the phone), and reckon it’s a wow.

For one thing, this new 2022 Razr boasts beautiful industrial design, with a high level of (matte) finish. It sits comfortably in the hand and effortlessly folds shut, making it easy to store in a pocket or bag.

This next-gen mobile offers two views: a 2.7-inch interactive Quick View display, which can be used for notifications, email, and photography, and a fully unfurled 6.7-inch FHD+ P-OLED display.

Any concerns that the screen itself would be compromised by the hinge prove unfounded. Fully open, the OLED display is completely flat, and looks excellent, with vibrant, wide colour, perfect blacks and high dynamic range – the phone is compatible with HDR10+; there’s real visual snap to the display.

A chic alternative to the mobile mainstream, its eye-catching form factor and advanced camera system are top tier attractions…

The hinge holds the device open in Flex View, allowing the mobile can stand on its own and be angled for hands free use. A split screen mode even allows several apps to be displayed at once. It can even double as a handy bedside alarm clock.

Photography is on point. An impressive 50MP main camera sensor is allied to an Instant All-Pixel Focus system with OIS stabilisation. Translation: it captures reliably crisp images. There’s also a 13MP ultrawide lens for landscapes, and a macro vision sensor so you can close in on your main course.

The Razr 2022 also supports Dolby Atmos spatial audio, brilliant for bingeing on Netflix or Disney+ when you’re not near a TV.

Stamina is impressive. The 3500mAh battery is 1.25x larger than the brand’s previous generation foldable, and it charges twice as fast.

Our verdict? We’re convinced Motorola has something special here. It’s time to join the fold.

Meet the Honor Magic Vs, the lightweight foldable smartphone you’ll want to buy in 2023

The fast rising foldable smartphone sector is about to get a lot more interesting with the arrival of the Honor Magic Vs. This slick new 5G mobile will launch in the UK sometime in 2023, but we’ve called in an early sample from the phone’s early China launch, to get a better look at the…

Premium audio outfit Bowers & Wilkins has partnered with McLaren to launch a limited edition of its high-end Px8 headphones with signature Papaya orange highlights. The McLaren Edition builds on the long-standing relationship between the two brands for in-car audio. Bowers & Wilkins is responsible for the audio system in the McLaren Speedtail, McLaren GT…