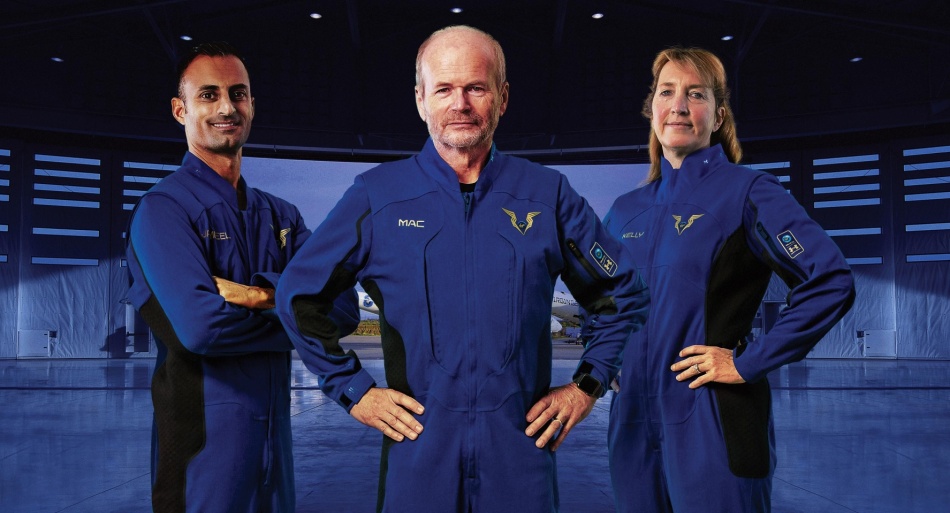 Virgin Galactic has unveiled the spacesuits its pilots will wear, prior to its first flight from New Mexico’s Spaceport America, on December 11.

Designed in collaboration with Under Armour, the company’s Technical Spacewear Partner, the Virgin Galactic Pilot Corps have been showing off their new duds.

The design team followed a brief to create a non-pressurised spacesuit which not only looks the part, but is up to the practical rigours of flying at three times the speed of sound into space and back. We reckon they’re also paying homage to the jumpsuits from the Star Trek Enterprise TV show, which recounted the early days of Star Trek’s Starfleet.

Randall Harward, Under Armour’s SVP of Material and Manufacturing Innovation said: “A pilot’s flight suit has been refined over the decades to embody a certain undeniable look and function, but they also have to perform beyond expectations. We took that as a starting point and built in all of the Under Armour solutions we’ve developed for comfort, support, movement and temperature management. Our goal was to build a suit that leaves a pilot, like any athlete, feeling confident and with zero distractions during a critical moment of performance. It’s been a fascinating journey.”

The spacesuit is lightweight at just over 1kg, but consists of flight-grade fabrics that ensure it is robust and strong. The suit is optimised for comfort in all stages of flight, whether that be during boost, when the forces press the pilots backwards into their seats, or in zero gravity where cushioning on the shoulders provides comfort as pilots are held in positions by seat straps.

The knitted fabrics which form the spacesuit help to regulate body temperature whether outside in the New Mexico sunshine or during the various phases of flight.

A common colour palette accentuates the fact that pilots and customers are all part of one crew. But the addition of black within the pilot spacesuits, sets the pilots apart (and is a reminder that the destination of each flight is the black sky of space). The pilot spacesuits also include the Virgin Galactic pilot wings emblem.

Each spacesuit is personally tailored for the pilot, and has the pilot’s embroidered name and a placement for their commercial astronaut wings.

Virgin Voyages has announced Melbourne, Australia as the brand’s new homeport in 2023.  Resilient Lady, the latest addition to the company’s four-strong cruise ship fleet, will make her way Down Under via an epic 44-night trans-continental voyage beginning October 2023, travelling from Athens to Sydney. The trans-continental stint comprises three different itineraries. The first 14-night END_OF_DOCUMENT_TOKEN_TO_BE_REPLACED

In the new Downton Abbey movie, Downton Abbey: A New Era, Lady Violet Crawley, played by Dame Maggie Smith, inherits a spectacular villa in the South of France.  The gift, from a gentleman she once spent a few days with (ahem), is the perfect excuse to take the cast regulars on vacay. Carry on Abroad END_OF_DOCUMENT_TOKEN_TO_BE_REPLACED

Next time you visit New York City, don’t forget to pack your cape and cowl. A new themed interactive visitor attraction featuring the caped crusader is opening this summer.  Top scientists in Gotham City are missing and the world is in upheaval. The Bat signal is in the sky. Time to step up and help END_OF_DOCUMENT_TOKEN_TO_BE_REPLACED