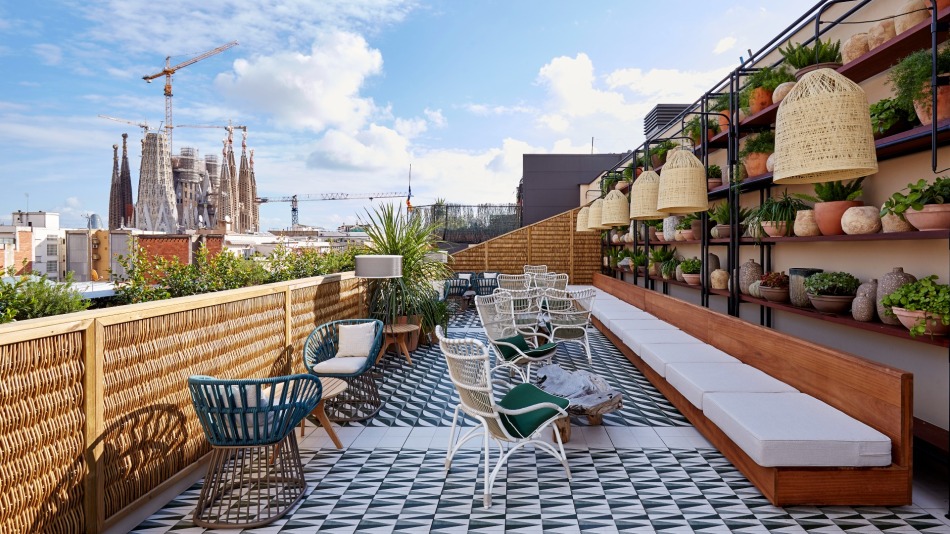 Located just 450 metres from the Sagrada Familia, the hotel offers convenient connections to the city centre, as well as Passeig de Gràcia and Plaça de Catalunya.

It’s also mere kilometres away from Parc Güell, a popular tourist attraction for Gaudí enthusiasts and families alike. The Radisson Blu 1882 is described as ‘modern with lots of style and a cosy and cosmopolitan feel.’

It boasts 182 rooms (choose from standard, superior, premium, premium deluxe, and family rooms), has free Wi-Fi, and a deal-clinching rooftop terrace and pool. The El Cel Bar, with its spectacular views of the city skyline, strikes us as the ideal spot to wind down after a perfect day spent exploring.

The El Cel Bar, with its spectacular views of the city skyline, strikes us as the ideal spot to wind down after a perfect day spent exploring…

The interiors of the common areas are the work of interior designer Lázaro Rosa-Violán. The style is urban, with a contemporary aesthetic showcasing a selection of designer pieces. Leather upholstery and high-pile rugs, are accented by lush greenery; the colour palette highlights the shades used in some of the furniture.

Reflecting its sustainable ethos, the Radisson Blu 1882 is home to more than 4,000 plants, including an 80m² vertical ecosystem of more than 3,000 plants in the El Bosc Terrace Bar, which we’re told can filter 10kg of dust per year and generate oxygen for 80 people.

The hotel also means business. It boasts 120 square metres of meeting and event space,  with the capacity to host up to 120 people; there are also 164 underground parking spaces for guests.

Want to explore this less frenetic barrio at your own pace? The hotel also operates a bicycle deposit scheme.

We can’t wait to visit! To book your stay at the Radisson Blu 1882, click here.

Award-winning French elderflower liqueur ST-GERMAIN has partnered with McQueens Flowers, for a terrace take-over across London, which runs until August 1. The al fresco hotspots list a new entry in what has become a seasonal perennial, Whitcomb at The Londoner, in London’s Leicester Square. Other pop-ups where you can enjoy a classic cocktail against an END_OF_DOCUMENT_TOKEN_TO_BE_REPLACED

From the States to outer space, here are four gins you must try for World Gin Day 2022

Take your gin game to the next level this World Gin Day (June 11), with four novel tipples that are far from ordinary. To help shake up your serves, we have craft gins from across the pond, a treat that’s typically topical and one gin that’s literally out of this world… And if that’s not END_OF_DOCUMENT_TOKEN_TO_BE_REPLACED

Dinosaurs loomed large over London this weekend when the cast of Jurassic Park Dominion assembled for a photocall in Trafalgar Square, before a cast and crew screening of the summer blockbuster. The film is the final entry of the Jurassic World trilogy, following Jurassic World and its sequel Fallen Kingdom, and unites stars from across END_OF_DOCUMENT_TOKEN_TO_BE_REPLACED