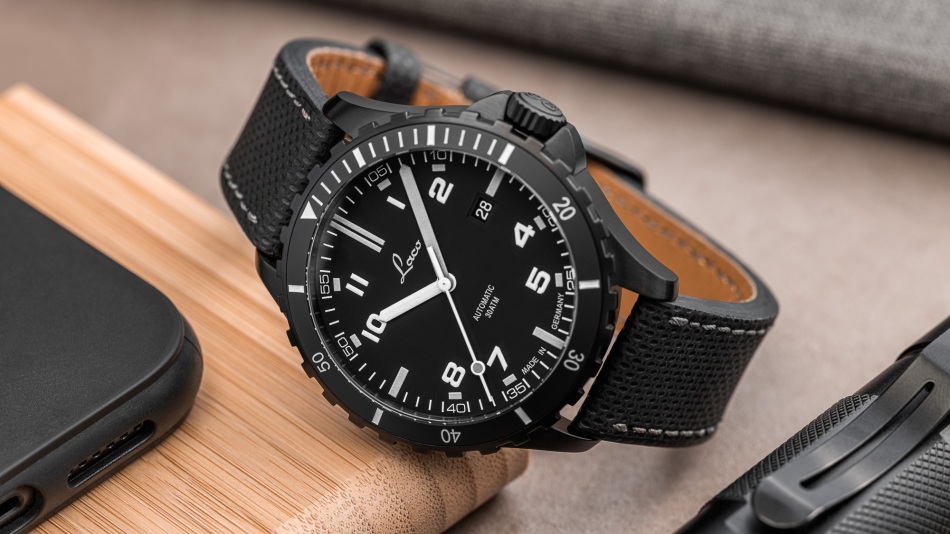 Released as the second of a total of five count-up models to the company’s anniversary in 2025, it’s suitable for both outdoor adventures and gala night elegance.

Limited to just 96 pieces, the delivery of the first batch will take place in January 2022. Those who order within the presale action until the end of the year will get a black Leatherman multitool.

Like other models in the series, the bottom of the Edition 96 is decorated with a scorpion relief. The 42 mm diameter stainless steel case has a matte black coating , with screwed embossed crown and bolted bottom; ready for long dives, it’s waterproof up to 30 metres. The leather strap with a linen structure impression is also waterproof through a patented coating, says the brand.

Like other models in the series, the bottom of the Edition 96 is decorated with a relief in the form of a scorpion…

Details include a unidirectional serrated ceramic bezel, and a contrasty dial with minimalistic indexes in discreet grey, numbers in pure white. The minute and hour hands correspond in the same colour scheme. The hands and indexes on the dial and bezel are coated in an afterglowing Superluminova C1. Under the black shell, the basic model uses a Laco 200 (Sellita SW 200-1) movement with automatic winding and a 38 hour power reserve.

Mechanical watch connoisseurs can upgrade from the installed Elaboré quality level to Top for a fee.

The limited edition is delivered in a travel pouch with a collector’s pin and a certificate of authenticity.

The watch can be ordered at a price of €1,290 during the December pre-sale period. It will then be delivered in the middle of January. December buyers will also receive a practical multi-tool from Leatherman, valued at €99.

Aviation watch specialist AVI-8 has released a second collaboration with the Royal British Legion. The new timepiece follows 2021’s chronograph, which has raised over £33,000 for the charity. The AV-4099 Flyboy Royal British Legion Falklands 40 Meca-Quartz Limited Edition pays tribute to the men and women who served during the Falklands conflict, 40 years ago.  END_OF_DOCUMENT_TOKEN_TO_BE_REPLACED