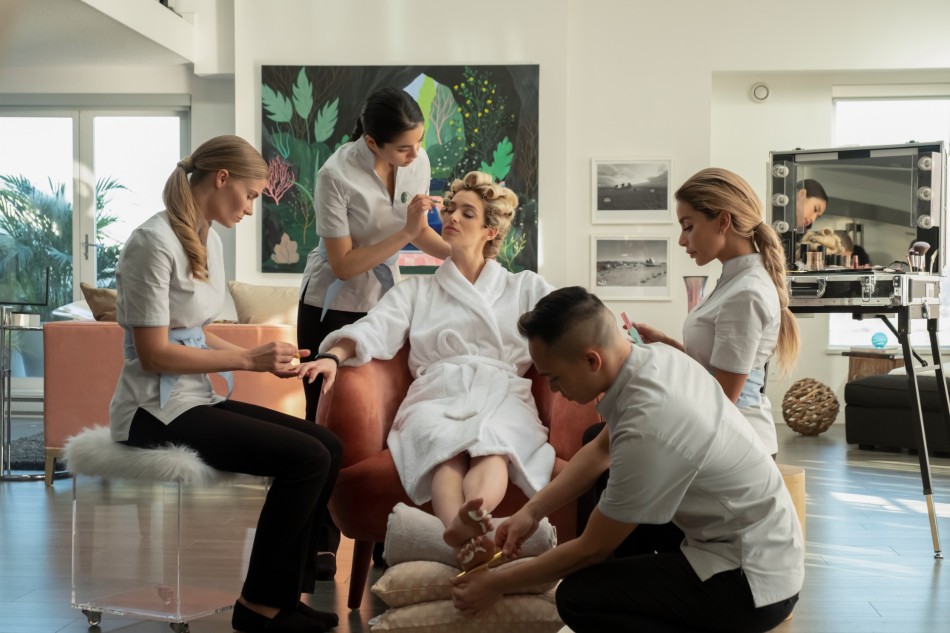 Upload, an intriguing new Sci-Fi comedy from writer Greg Daniels (The Office, Parks and Recreation) will launch on Amazon Prime Video May 1.

The show is set in a technologically advanced future where hologram phones, 3D food printers and automated grocery stores are the norm. Humans can choose to be uploaded into a virtual afterlife, when they find themselves near-death.

Daniels says he first had the idea back in 2008. “The concept is actually an idea I had walking around midtown Manhattan thinking of Saturday Night Live sketches.”

Parks and Rec writer Daniels describes Upload as a mix of sci-fi, mystery, romance and comedy…

The series follows a young app developer, Nathan Brown (Robbie Amell), who winds up in the hospital following a self-driving car accident, needing to quickly decide his fate. After a rushed deliberation with his shallow girlfriend Ingrid (Allegra Edwards), he chooses to be uploaded to her family’s luxurious virtual afterlife, Lakeview. Once uploaded, Nathan meets his customer service ‘Angel’ Nora Anthony (Andy Allo), who helps him navigate this new digital extension of life.

Daniels describes it as a mix of sci-fi, mystery, romance and comedy. “It’s essentially a character comedy about science and love attempting to beat death,” he says. “I did a ton of research about what inventions and problems are coming down the pike, and aspects of the show that were more ‘out there’ keep coming true. One day I expect we really will be able to upload into a virtual existence, and then we can enjoy banner ads and pop-ups forever and ever.”

Daniels also serves as executive producer along with Howard Klein, on the ten-episode series.