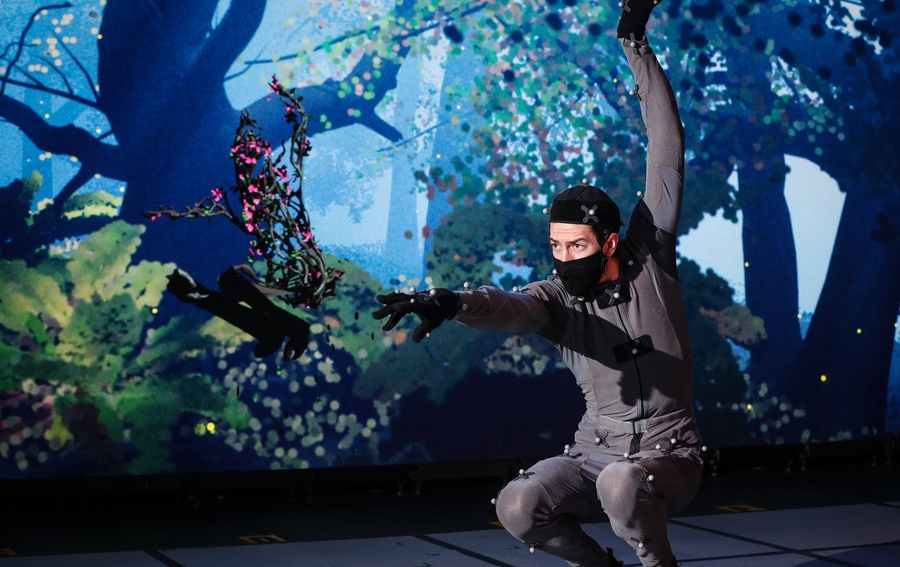 Inspired by Shakespeare’s A Midsummer Night’s Dream, Dream explores how audiences could experience live performance in the future in addition to a regular visit to a performance venue.

It offers audiences the ability to directly influence the live performance from wherever they are in the world. The performance uses a combination of gaming and theatre technology, together with an interactive symphonic score that responds to the actors’ movement during the show.

Dream was due to open in Spring 2020 as an in person and online live performance and has been recreated during the pandemic for online audiences while theatres remain closed.

The live performance is set in a virtual midsummer forest. Under the shadow of gathering clouds at dusk, lit by the glimmer of fireflies, Puck acts as the guide. Audiences are invited to explore the forest from the canopy of the trees to the roots, meet various characters and regrow the forest before the dawn.

The performance uses a combination of gaming and theatre technology, together with an interactive symphonic score…

The 50-minute online event will be a shared experience between remote audience members and the seven actors who play Puck and the sprites. Audiences can choose to buy a £10 ticket to take part and at key points in the play directly influence the world of the actors, or to view the performance for free.

Building on the technology used in the RSC’s 2016 production of The Tempest, the first play to feature live performance captured in Unreal Engine, the  production will be performed with seven actors in a specially created 7x7m motion capture volume created at the Guildhall in Portsmouth. The performance space includes an LED backdrop which displays the unreal world allowing performers to see their place and act within the virtual environment.

Motion capture cameras and facial rigging capture the movements of the performers.  This in turn drives the virtual avatars of each of the characters in real-time through a traditional performance lighting desk into Epic Games’ Unreal Engine. The live performance is mixed with pre-recorded animation sequences.

The actors perform and respond to audience interaction and direction making each performance unique, as the audience will behave differently at each event.

A bespoke web-player has been created for Dream to enable the effective distribution of real-time content from individual audience members to the Unreal Engine server and back to the audience.

The interactive symphonic score by the Philharmonia Orchestra will be manipulated in key points in the play in real-time by the performers, who will create interactive music with their movements.

The ten Dream performances are scheduled so that audiences across the world can join the event.

Stories haven’t changed, but the way we engage audiences with them has, says Gregory Doran, RSC Artistic Director. “What’s brilliant about Dream is the innovation at play. An audience member sitting at home influencing the live performance from wherever they are,that’s exciting.  It’s not a replacement to being in the space with the performers but it opens up new opportunities. By bringing together specialists in on-stage live performance with that of gaming and music you see how much they have in common. For instance, the RSC’s deep understanding of scripted drama combined with Marshmallow Laser Feast’s innovation in creative tech brings thrilling results.”

The installation will feature core classical repertoire and two contemporary orchestral works – excerpts from Gemini, the latest composition by Esa-Pekka Salonen, and Ärr, composed by Swedish composer Jesper Nordin. The music was recorded by the Orchestra in March 2020, the last full-scale orchestral recording, involving 100 players, before the pandemic struck.