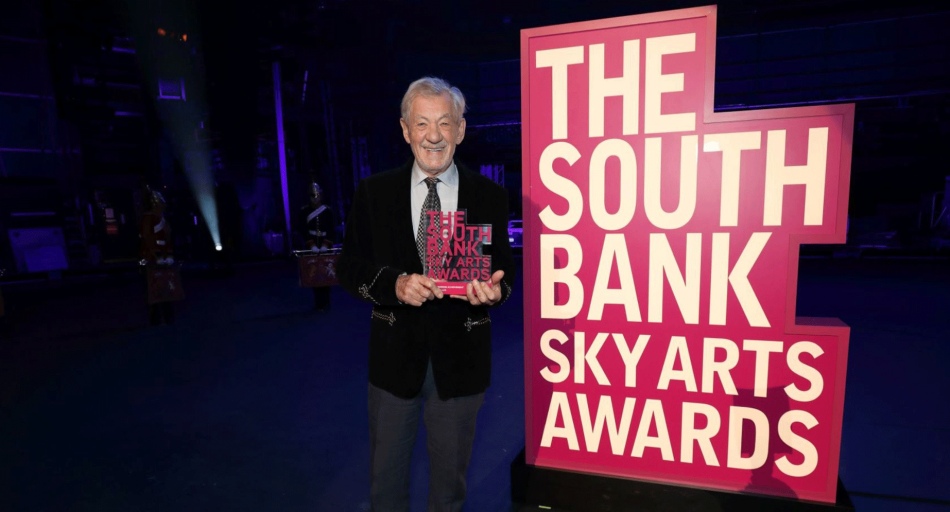 The winners of this year’s 24th annual South Bank Sky Arts Awards were announced yesterday in a socially distanced ceremony at the London Coliseum, home of English National Opera.

Hosted by Melvyn Bragg, the awards represent the entire spectrum of the arts, with nominations covering TV Drama, Classical Music, Theatre, Comedy, Dance, Film, Visual Art, Pop, Literature and Opera. The event will be screened by Sky Arts on December 20.

Sir Ian McKellen took to the stage to accept the Outstanding Achievement Award, recognising his contribution to theatre and film. He was congratulated via video by Dame Judi Dench and Dame Helen Mirren.

“I am very happy and honoured to be in the company of the nominees for this tricky year’s South Bank Sky Arts awards,” said Sir Ian. “The closure of theatres in response to an outside threat to the country, is not unprecedented. When another plague reached London 450 years ago, the theatres were closed and Shakespeare’s company was out of work. No furlough. His response to one lockdown was to write Macbeth, Antony & Cleopatra and King Lear. I hope during our lockdowns that playwrights have been busy writing plays. More, I hope others have been planning and imagining future productions.”

“When another plague reached London 450 years ago, the theatres were closed and Shakespeare’s company was out of work. No furlough. His response to one lockdown was to write Macbeth, Antony & Cleopatra and King Lear. I hope during our lockdowns that playwrights have been busy writing plays.”

The Souvenir took home the Film award, with director Joanna Hogg and actor Tilda Swinton joining the ceremony via video to accept the gong. The Sheffield Crucible won this year’s hotly contested theatre award for its outstanding production Standing at the Sky’s Edge, collected by Robert Hastie, Artistic Director of Sheffield Theatres.

Steve McQueen’s Year 3, which appeared at Tate Britain and on billboards across London won the Visual Art category. Joining the ceremony from Amsterdam, Steve thanked “all of the schoolchildren and their teachers. Here’s to their future.” Meanwhile, Edna O’Brien triumphed in the Literature category for her masterful novel Girl, inspired by the women abducted by Boko Haram.

The Times Breakthrough Award was awarded to Waad al-Kateab, the Syrian journalist, filmmaker and activist whose documentary For Sama won two BAFTAs and an Academy Award.

Two special performances also took place on stage over the course of the evening. Trumpet virtuoso Alison Balsom performed her own arrangement of Albinoni’s Oboe Concerto in D minor whilst Faith Omole gave a rendition of Richard Hawley’s ‘Coles Corner’ from Standing at the Sky’s Edge.

Speaking at the event, Balsom commented: “The UK performing arts industry has been the envy of the world for decades, centuries. But this year has been, there is no other way to describe it, than catastrophic for tens and thousands of artists and creatives, but also joyless for the millions of us who know that the Arts give us all something to live for. That the South Bank Sky Arts Awards have yet again been able to recognise more of these achievements, despite everything, is a ray of hope for the future.”

A full list of nominations for this year’s Sky Arts Awards can be found here.

Kirk Hammett, lead guitarist of Metallica, has released the first track from his upcoming debut solo EP, ‘High Plains Drifter’, music which he describes as taking an audio-cinematic approach. “They’re soundtracks to the movies in your mind.” The track opens the second side of Portals, the four-song EP out April 23, 2022 via Blackened Recordings END_OF_DOCUMENT_TOKEN_TO_BE_REPLACED

Season three of For All Mankind will make its global debut on Friday, June 10, 2022 on Apple TV+, the streamer has confirmed. The ten-episode third season will debut with the first episode, followed by one new episode weekly, every Friday. The new season of the hit alternate-reality series takes viewers to a new decade, END_OF_DOCUMENT_TOKEN_TO_BE_REPLACED

God Save the Sex Pistols: Danny Boyle Pistol TV series pogos onto Disney+ this May

Danny Boyle’s eagerly anticipated Sex Pistols series, Pistol, will land on Disney+ May 13. The limited series, based on Pistols’ guitarist Steve Jones’ 2017 memoir Lonely Boy: Tales from a Sex Pistol, recounts the heady early days of the Pistols, the punk band who sparked a music revolution in the UK.  Pistol will screen exclusively END_OF_DOCUMENT_TOKEN_TO_BE_REPLACED