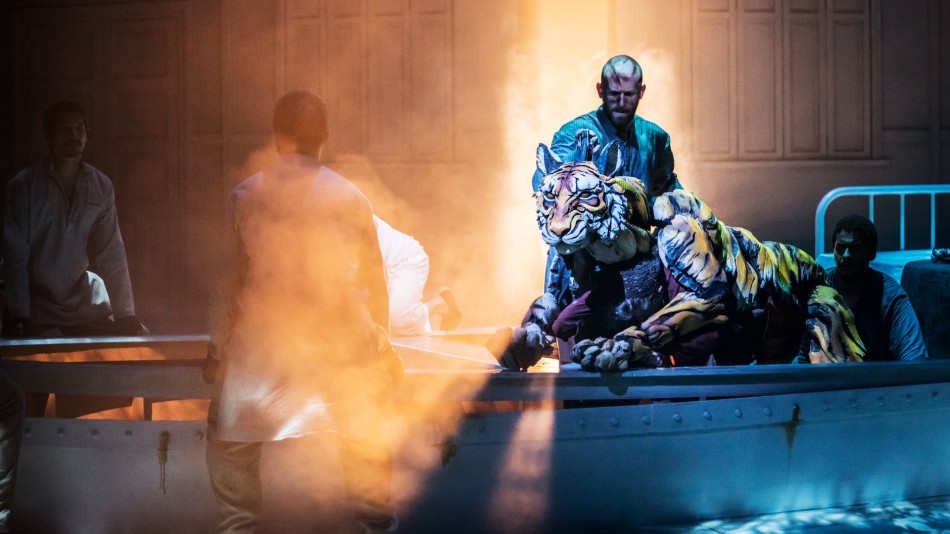 Rehearsals are underway for the West End premiere of Life of Pi, Lolita Chakrabarti’s ambitious stage adaptation of Yann Martel’s award-winning novel. The play begins performances at the Wyndham’s Theatre in London on November 15 2021.

To accommodate the production, the historic Wyndham’s Theatre is said to be undergoing a spectacular transformation.

Winner of the Man Booker Prize, selling over fifteen million copies worldwide, the theatrical adaptation of Life of Pi is described as ‘an epic journey of endurance and hope.’

After a cargo ship sinks in the middle of the vast Pacific Ocean, there are five survivors stranded on a single lifeboat, a hyena, a zebra, an orangutan, a sixteen year-old boy and a 450-pound Royal Bengal tiger. Time is against them, nature is harsh, who will survive?

The novel was filmed by Ang Lee and released in 2012. For the movie, cutting edge VFX and 3D filming techniques were used to bring the extraordinary animals to life. For this stage production, leading edge puppetry provides the magic, under the guidance of Puppet & Movement Director Finn Caldwell. Caldwell began his career in the original company of the National Theatre’s international phenomenon War Horse.

For the movie, cutting edge VFX and 3D were used to bring the extraordinary animals to life. For this stage production, leading edge puppetry provides the magic…

Lolita Chakrabarti’s writing credits include Red Velvet, which was nominated for nine major awards including two Olivier Awards. Lolita is the winner of the Evening Standard Theatre Award for Most Promising Playwright, The Critics Circle Award for Most Promising Playwright and the AWA Award for Arts and Culture; She also adapted Italo Calvino’s Invisible Cities for MIF in 2019; her play Hymn was live streamed in February 2021 from the Almeida, before opening to audiences later in July.

Her acting credits include Vigil (BBC), Riviera (Sky), Born to Kill (Ch4), Criminal (Netflix), Fanny and Alexander (The Old Vic), Hamlet (RADA). She can soon be seen in Showtrial for the BBC and Wheel of Time for Amazon Prime.

Life of Pi is produced by Simon Friend. To book tickets visit lifeofpionstage.com.

Acclaimed paella and tapas restaurant Arros QD, in London’s Fitzrovia, is offering a romantic omakase tasting menu as a Valentine’s Day treat.  Normally associated with Japanese eateries, omakase is a phrase that means ‘I’ll leave it up to you’ or, when it comes to ordering food, ‘I’ll trust the chef. ‘  This Valentine’s Day, tapas…

Sometimes, you bite into a morsel so delicately delicious, you know you’ll be thinking about it for at least three months after.  And sometimes, you take a sip and know the drink will be on your mind every time you order a rather less mind-blowing iteration of the same cocktail.  Both of these instances happened…