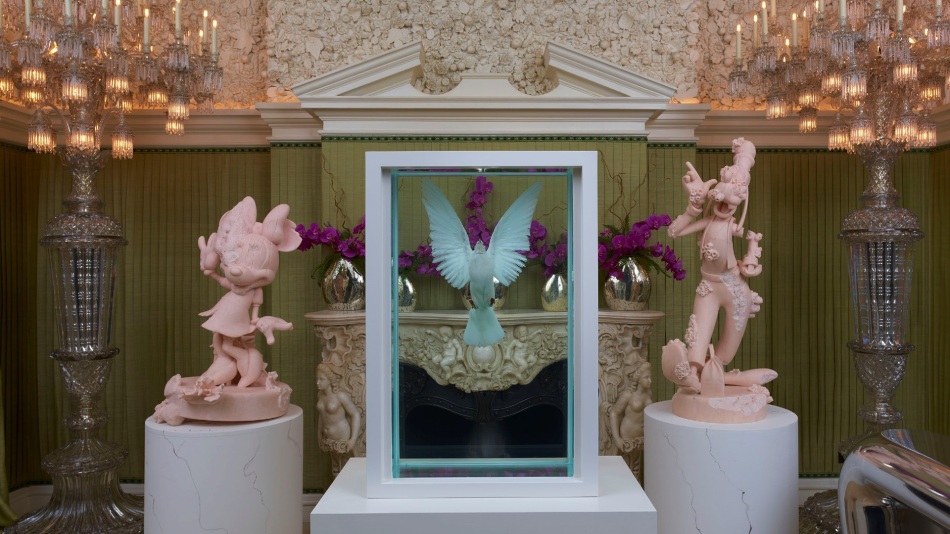 Private Members’ Club Annabel’s is collaborating with Damien Hirst to host an exclusive presentation of rarely seen work by the artist, as part of Frieze London 2021. Members and guests will be able to view Hirst’s sculptures throughout the Mayfair club until October 24.

Annabel’s is showcasing Hirst’s Gold and Silver sculptures from ‘Treasures.’ First seen in 2017, the collection presents sculptural relics from a fictional shipwreck off the coast of East Africa; the artist plays fast and loose with linear time, cultural origin, and perceptions of relative status and value.

We’re told: ‘Sparking unexpected interactions between ancient and modern, Hirst’s ‘Treasures’ exemplifies the idea of myth making that lies at the core of culture, both high and low.’

In the reception, guests are greeted by the formaldehyde artwork ‘Peace.’ Seven additional works are located throughout the Club. They shouldn’t be hard to spot: ‘Hathor’ resides on the mantelpiece in the Rose Room, while ‘Minnie’ and ‘Goofy,’ carved out of pink Portuguese marble and encrusted with painted barnales, offer greetings at the entrance.

Works such as ‘Chinese Elephant’ and ‘Cat (Egyptian)’ appear perfectly at home amid the unapologetic opulence of the Annabel’s rooms and the animal theme used throughout.

Since the late 1980’s, Damien Hirst has used installation, sculpture, painting and drawing to explore the complex relationship between art, life and death. Of his work, Hirst says: “Art’s about life and it can’t really be about anything else … there isn’t anything else”

In 2018, Annabel’s opened the doors to its new home, a Grade I listed Georgian mansion house, at 46 Berkeley Square, just two doors down from its original location, where it opened in 1963.

The Club has five restaurants, including a garden eatery with retracting glass roof, The Mexican and Matteo’s, an Italian restaurant that pays homage to the original Annabel’s In terms of design, and boasts the world’s biggest selection of Sassicaia, Monfortino and Dom Perignon.

Opening 2022, this eclectic new London hotel will celebrate the spirit of old Soho

The spirit of old Soho will live on in a new hotel opening planned for 2022. The  Broadwick Soho, described rather charmingly as ‘Seventies hedonistic disco pop, meets your eccentric Godmother’s townhouse’, is a 57 room hotel, with a Sicilian inspired restaurant and terrace, rooftop lounge, intimate dining room and speakeasy bar.  Styling is by END_OF_DOCUMENT_TOKEN_TO_BE_REPLACED

The Great Feast review: An experiential eating experience with a gourmet twist

Seven of London’s hottest chefs have partnered to produce The Great Feast, a festive foodie fantasia that can be enjoyed in The Old Selfridges Hotel in the run up the Christmas.  Offering a mouth-watering selection of bites, plus an experiential all-plant joyride, it’s a novel night out with a gourmet twist. Team TLR tried it END_OF_DOCUMENT_TOKEN_TO_BE_REPLACED

Sir Paul McCartney and friends come together for Peter Jackson’s The Beatles: Get Back docuseries preview

Sir Paul McCartney was joined by friends and family, including Mary McCartney, Dhani Harrison, Zak, Lee and Jay Starkey at London’s Cineworld Leicester Square this week, for an exclusive 100 minute preview of Peter Jackson’s new docuseries The Beatles: Get Back.  The series will land exclusively on Disney+ November 25, 25 and 27. Ironically, it END_OF_DOCUMENT_TOKEN_TO_BE_REPLACED