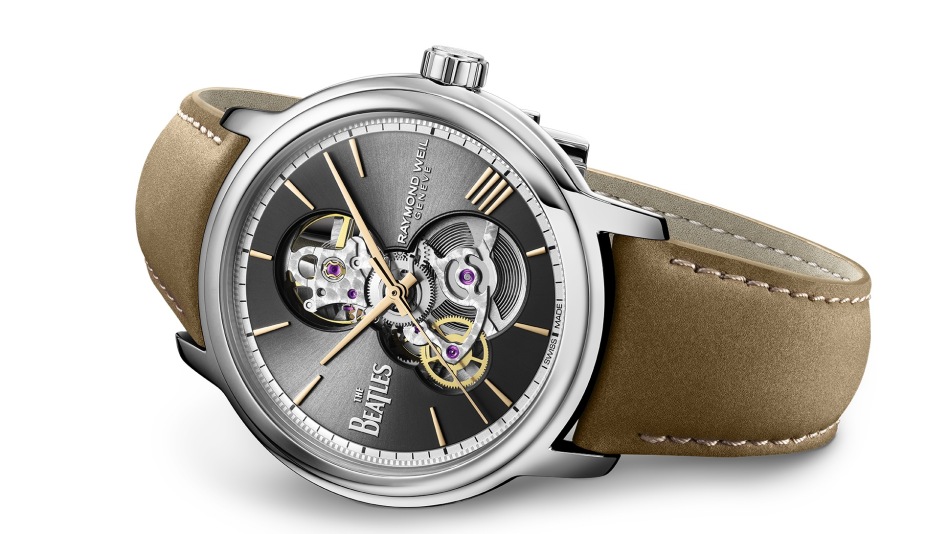 Raymond Weil has launched its fourth maestro series Beatles timepiece, the last in its partnership with the legendary British band brand.

Limited to 3,000 pieces, the Let It Be edition features a mechanical self-winding skeleton movement,  revealed by a subtle cut-out shaped like the United Kingdom. It’s housed in a round polished stainless steel case, 400mm wide by 9.2mm thin, offering a 38-hour power reserve.

The official Beatles logo at 9 o’clock balances the Raymond Weil logo at 3 o’clock; the case back, with smoked sapphire crystal, features a more prominent Beatles logo.

The crown is polished steel, fluted with the RW monogram. Water resistance is certified to 50 m.

When it comes to design, the watch plays on the contrast between the anthracite dial and the rose gold plated hands and baton indices, in particular revealed at 4 o’clock. The four-baton index represents John, Paul, George and Ringo, with the watch hands centred on the city of Liverpool, where the Beatles story began.

When it comes to design, the watch plays on the contrast between the anthracite dial and rose gold plated hands…

Let It Be was the twelfth and final studio album from The Beatles. It was released May 8 1970.

‘The Let It Be maestro The Beatles model carries a timeless message of optimism and recalls the spirit of an entire era reviving images of an impromptu concert on the rooftop at Apple  Studios. This was to be their last ever live performance,’ proclaims the watchmaker.

The Beatles Let It Be limited edition watch (2215-STC-BEAT4) comes with a certificate of authenticity from Raymond Weil and Apple Corps, and is priced at £1,750. More here: Raymond-Weil.co.uk.

In related news, Peter Jackson’s eagerly anticipated Beatles documentary, The Beatles: Get Back, will debut as a limited edition series on November 25.  The feature will stream in an extended three episode form, rather than premiere in theatres as a standalone movie, as originally planned.

Sony has taken a design diversion with the latest update to its 1000X noise cancelling Bluetooth headphone series. The WH-1000XM5 cans feature a sleek new look with a stepless headband slider.  Unlike their predecessors, there are no hinges and they’re not collapsible. The ear cushion shape is also slightly rounder, ostensibly to better block external END_OF_DOCUMENT_TOKEN_TO_BE_REPLACED

New female-founded, London based cashmere brand, MyCashmere, has launched a range of premium knitwear which it says bridges the gap between elegance and comfort, while advocating sustainability. Produced in Italy, the collection includes a variety of tops, cardigans, trousers, shorts, sweaters and dresses, all in neutral tones. The range plays into the idea of slow END_OF_DOCUMENT_TOKEN_TO_BE_REPLACED

A new home interiors showroom targeting Manchester’s fashionistas has opened in Altrincham. Oppein offers deluxe kitchens, wardrobes, fitted furniture and bathroom products with a designer spin from its store on Stamford New Road.  The idea behind the service is refreshingly simple, we’re told. Customers can walk in with a mood board of ideas and leave END_OF_DOCUMENT_TOKEN_TO_BE_REPLACED

As an Amazon Associate, we may earn a commission when you buy through links on our site, at no extra cost to you. This doesn’t affect our editorial independence.