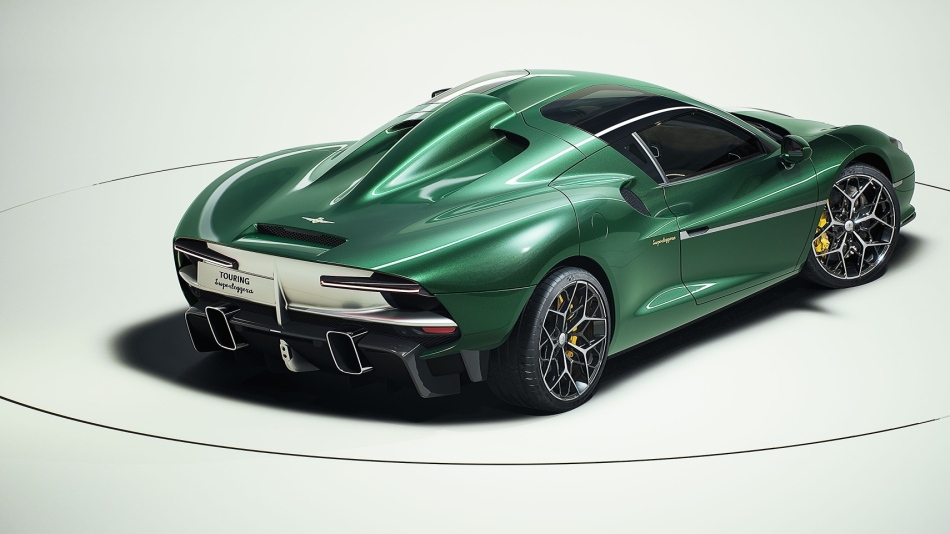 Italian styling house Touring Superleggera is celebrating its 95th anniversary by launching its first mid-engined coupé. The V8-powered Touring Arese RH95 is set to make its UK debut during the exclusive 2021 Salon Privé car show at Blenheim Palace in September.

Named after Superleggera’s home township in Milan (and the initials of the Arese project’s unknown founding patron), just 18 of the carbonfibre-bodied Arese RH95s will be made, each to a fully bespoke spec.

They’ll be sold alongside the Alfa 8C inspired Aero 3, one of last year’s Salon Privé star turns (previous jaw-dropping efforts include the Bentley Flying Star and Disco Volante Coupé) which remains in production.

Drawing inspiration from the coachbuilder’s previous efforts, the new model features novel scissor-hinged doors, a bright aluminium side-slash, a sensuously low waistline inspired by the aforementioned Disco Volante, as well as a beautifully proportioned grille and frontal treatment that echoes that of the Aero 3.

Superleggera says the new model will be built around the drivetrain of ‘a well-known exotic, mid-engined donor car’…

Coyly, Superleggera says the new model will be built around the drivetrain of ‘a well-known exotic, mid-engined donor car’ but declines to specify exactly which. For those who hate mysteries, a cursory examination of the RH95’s engine/gearbox specifications and the interior suggest that long-term partner Ferrari’s spectacular 488 Pista is almost certainly the base car in question.

Price? Superleggera isn’t saying. Safe to say, however, if you have to ask you’re absolutely not the target customer demographic for one of these beauties. Probably best to just join us for a consolation gawp when it makes its debut at Blenheim in the Autumn…

High-end Hi-Fi outfit Bowers & Wilkins and luxury supercar maker McLaren Automotive have announced a strategic long-term multi-year partnership that sees Bowers & Wilkins become McLaren’s Official Audio Partner. The pair are no strangers. Bowers & Wilkins has been responsible for the development of the high-performance audio systems found in the marque’s supercars and hypercars END_OF_DOCUMENT_TOKEN_TO_BE_REPLACED

Salon Privé London got off to a spectacular start this week, with record breaking ticket sales and a host of new car launches, previews and unveils.  The three day event parked up at the Royal Hospital Chelsea for the first time, and made itself right at home. TLR went along on the opening day, and END_OF_DOCUMENT_TOKEN_TO_BE_REPLACED

From F1 to Motor Valley Fest, why now is the best time to visit Italy if you’re a motor fan

Dubbed Italy’s Motor Valley, Emilia Romagna is calling petrol heads and Italophiles to a trio of high profile motor events this spring: Formula 1 this month, MotoGP and Motor Valley Fest in May.   The northern Italian region has been long regarded as the Motor Valley due to its contribution to Italy‘s automotive industry. In addition END_OF_DOCUMENT_TOKEN_TO_BE_REPLACED