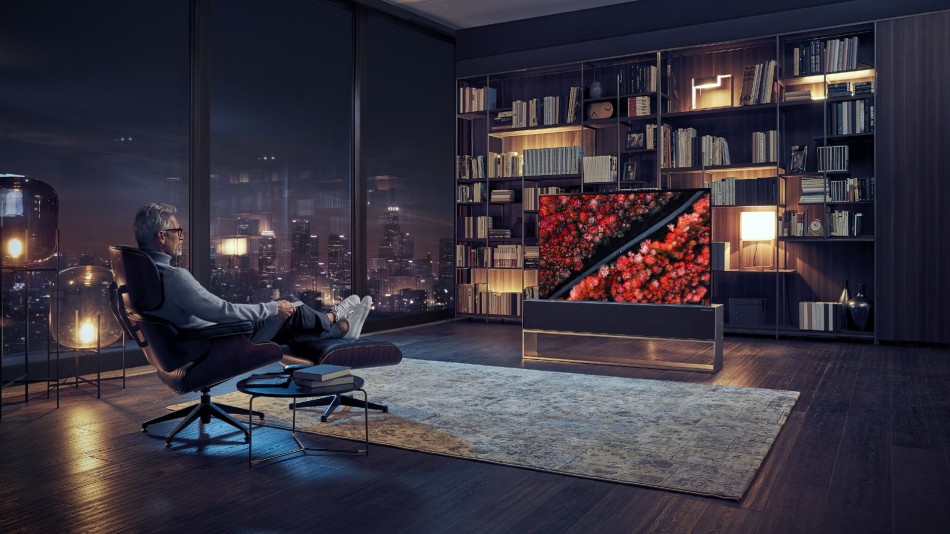 LG’s extraordinary rollable OLED TV is coming to the UK as part of the brand’s no-compromise SIGNATURE product line.

The LG SIGNATURE OLED R is a 65-inch flexible OLED display that arises from a compact cabinet, unrolling to reveal a full-sized OLED screen.

OLED panels are intrinsically flexible, and we’ve seen various concept screens that exploit this, as well as LG’s own ‘wallpaper’ OLED W model, but the OLED R is the first display to truly exploit this characteristic.

Unfurled, the self-lit pixel display looks just like any other cinematic OLED 4k HDR TV, with characteristically deep blacks and vibrant hues. When no longer required, the screen rolls back into its cabinet. LG says the Rollable OLED is thus able to achieve ‘perfect spatial and visual harmony in any interior setting.’

Dubbed The TV of Tomorrow, LG is now taking pre-orders for the set, which will sell for £99,999.

When no longer required, the screen rolls back into its cabinet, achieving ‘perfect spatial and visual harmony in any interior setting.’

TLR had an early hands-on with the OLED R Rollable, in prototype form, at the 2020 Las Vegas CES show – and we were was blown away by its futuristic presentation. Does it pave the way for a mainstream future for rollable Sc-Fi displays? Probably not, but as a piece of engineering it’s certainly eye-catching.

The rollable screen can be configured for Full View, Line View and Zero View.  In Full View, it looks and behaves like any other widescreen OLED. In Line view, only the top quarter portion of the screen rolls up from its enclosure, for use as a news ticker, a photo frame, or graphical display for streaming music services. In the Zero View, the screen stays hidden allowing cabinet’s integrated sound system can play like an over-sized Bluetooth audio system. When we auditioned the prototype, it boasted a 4.2-channel Dolby Atmos sound system, with a 100W power output.

Every rollable TV is produced to order, no doubt painstakingly assembled by the most experienced production professionals at LG’s OLED factory in South Korea. The cabinet has a smart aluminium finish, while the forward facing kevlar speaker array is located behind acoustically transparent Kvadrat cloth.

The OLED R will join LG’s 2021 OLED screens, albeit in limited quantities. Until now, the most expensive LG OLED was the 8k ZX 88-incher, which currently sells for a paltry £20,000.

Panasonic has taken the wraps off its 2021 TV range, with screens designed to deliver the best performance for home cinema fans, gamers and armchair sports enthusiasts. Earlier this year, the company previewed its flagship JZ2000 OLED. Now we know there with be three models positioned below it:  the JZ1500 (pictured above), JZ1000 and JZ980 END_OF_DOCUMENT_TOKEN_TO_BE_REPLACED

Looking to upgrade your TV? If so, you’ll be intrigued to hear that LG OLED screens have been honoured at the 72nd Annual Technology & Engineering Emmy Awards, a significant industry accolade for LG consumer TV division. Established by the National Academy of Television Arts & Sciences in 1948, the Technology & Engineering Emmy Awards END_OF_DOCUMENT_TOKEN_TO_BE_REPLACED

Panasonic has thrown down the gauntlet to rival TV manufacturers, unveiling its new range-leading OLED TV at the virtual CES 2021. The incoming JZ2000 is the best specified premium OLED screen we’ve seen yet from the brand, with the widest level of HDR support and a raft of advanced features to satisfy film fans and END_OF_DOCUMENT_TOKEN_TO_BE_REPLACED