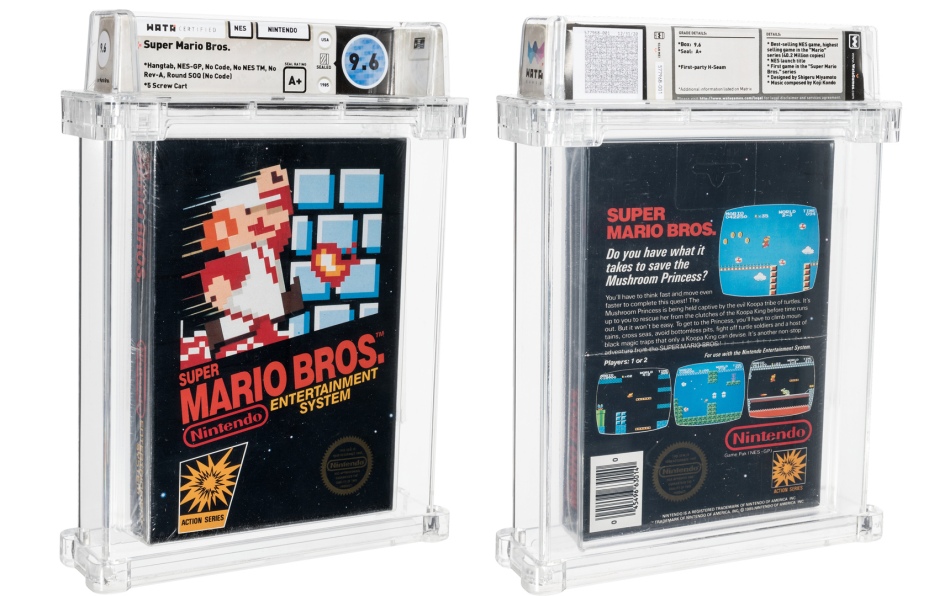 An ultra rare copy of Super Mario Bros, forgotten for nearly 40 years in an office desk drawer, has sold for a record-breaking $660,000 at auction.

The classic 1985 Nintendo video game is the finest known to have been professionally graded for auction. The previous world record for a copy of Super Mario Bros was $114,000, which was set in July 2020 by Heritage Auctions .

Valarie McLeckie, Director of Video Games at Heritage Auctions, and a leading specialist in the field of vintage and collectable video games, said: “Not only is this the finest plastic-sealed copy, it is also the oldest sealed copy of Super Mario Bros we’ve ever had the opportunity to offer.”

“As soon as this copy of Super Mario Bros. arrived at Heritage, we knew the market would find it just as sensational as we did. Even so, the degree to which this game was embraced outside the market has been nothing short of exceptional, and that aspect of this sale has certainly exceeded our expectations. Though, I suppose we can’t be too shocked; who doesn’t love Mario?”

The anonymous seller originally bought the classic video game in 1985, a Christmas gift for her nephews. Only it never made it beyond a desk drawer and remained untouched for 36 years, before being re-discovered earlier this year.

“It stayed in the bottom of my office desk this whole time since the day I bought it,” the seller confessed. “I never thought anything about it. I had a pretty good idea it was worth something,” the seller said, but I have no idea whatsoever that the hangtag on it made it really worth something. It’s better than getting a lottery ticket – I couldn’t believe it.”

The seller’s nephew offered to sell the game through an online auction website. When he received an offer far above the game’s current bid, he knew it was something rather special.

What makes this Nintendo cartridge so valuable is that it retains the original perforated cardboard hangtab, a feature unheard of in collecting circles, effectively making it as a close to mint example ever discovered.

“By early 1987, Nintendo was producing a version that had another new variation to their original packaging,” McLeckie said. “Since the production window for this copy and others like it was so short, finding another copy from this same production run in similar condition would be as hard as looking for a single drop of water in an ocean. Never say never, but there’s a good chance it can’t be done.”

Philips is promising a leap forward in TV picture quality and screen design with its 2022 OLED807 television. To be made available in 48-, 55-, 65- and 77- screen sizes, the set will be one of the first to utilise all new OLED-EX panel technology, which gives a brighter picture and permits a slimmer bezel END_OF_DOCUMENT_TOKEN_TO_BE_REPLACED

Huawei has expanded its Matebook range with the 14.2-inch MateBook 14s. The new model promises a smart productivity experience with a raft of novel features, including AI Noise Cancellation, but it’s a more than capable gaming laptop too. The MateBook 14s features a 2.5K touch FullView high brightness (400 nit) display in a 3:2 ratio, END_OF_DOCUMENT_TOKEN_TO_BE_REPLACED