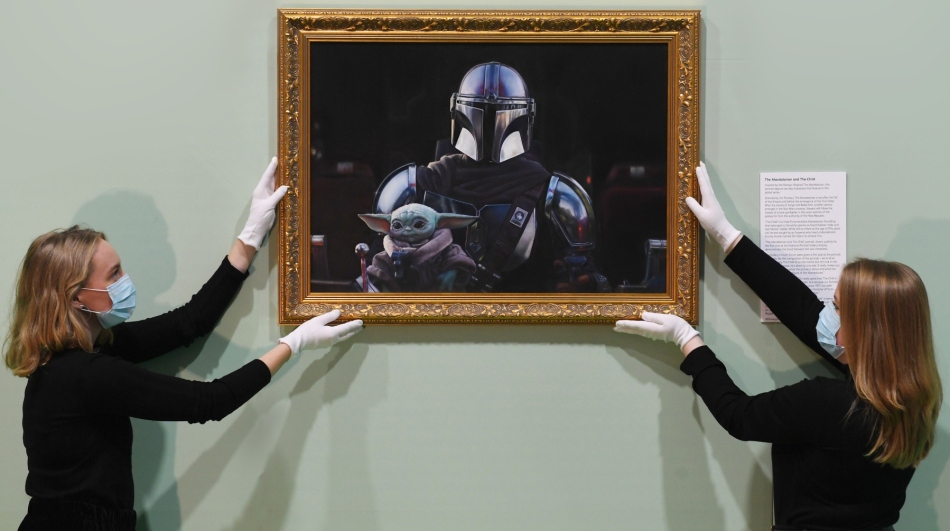 A portrait of the Mandalorian has been unveiled at a display in London in collaboration with the National Portrait Gallery, to herald the second season of Lucasfilm’s The Mandalorian on Disney+.

‘The Mandalorian and the Child,’ a 3 x 2ft oil portrait, will hang alongside some of the National Portrait Gallery’s own collection of portraits of familiar faces from the Star Wars galaxy, including Sir Alec Guinness, Thandie Newton, Felicity Jones, Ben Morris, Riz Ahmed and Gareth Edwards. The display will also include original concept art from The Mandalorian created by extraordinary artists such as Doug Chiang, John Park and Christian Alzman.

The display is available to view via a free-ticketed event, from October 30 – 31 only, so if you want to catch it you’ll need to fire up your Speeder bike.

“This is truly the way to mark the arrival of the second season of The Mandalorian,” says Luke Bradley-Jones, Senior Vice President at Disney+. “We are honoured to unveil this portrait in collaboration with the esteemed National Portrait Gallery. The show and characters created by Jon Favreau have been embraced by fans across the UK who can now stand a step closer to inspect them on canvas before streaming the new episodes.”

Ros Lawler, Chief Operating Officer at National Portrait Gallery describes Star Wars as a cultural phenomenon that has had a huge impact on popular culture , saying: “We are delighted to have worked with Disney+ on the Star Wars display, which includes the painting of ‘The Mandalorian and the Child’. We hope that this unique collaboration between the Gallery and Disney+ will encourage new audiences and young people to our Collection, allowing them to come face to face with their Star Wars heroes.”

The Star Wars spin-off is set after the fall of the Empire and before the emergence of the First Order. The first season followed the titular gunfighter in the outer reaches of the galaxy far from the authority of the New Republic. In the second season, the Mandalorian and the Child will continue their journey, facing enemies and rallying allies as they make their way through a dangerous galaxy in the tumultuous era after the collapse of the Galactic Empire.

The Gallery’s Youth Forum were given a first look at the portrait: “We really like the composition of the portrait – we’re all so used to seeing the Child as a cute meme, but he’s not in the centre of the canvas, he’s down to one side. It really makes you look carefully to see what the picture is about and what the relationship is with the figure of the Mandalorian.”

To apply for a ticket to the showing email gallery@wdwentertainment.com.