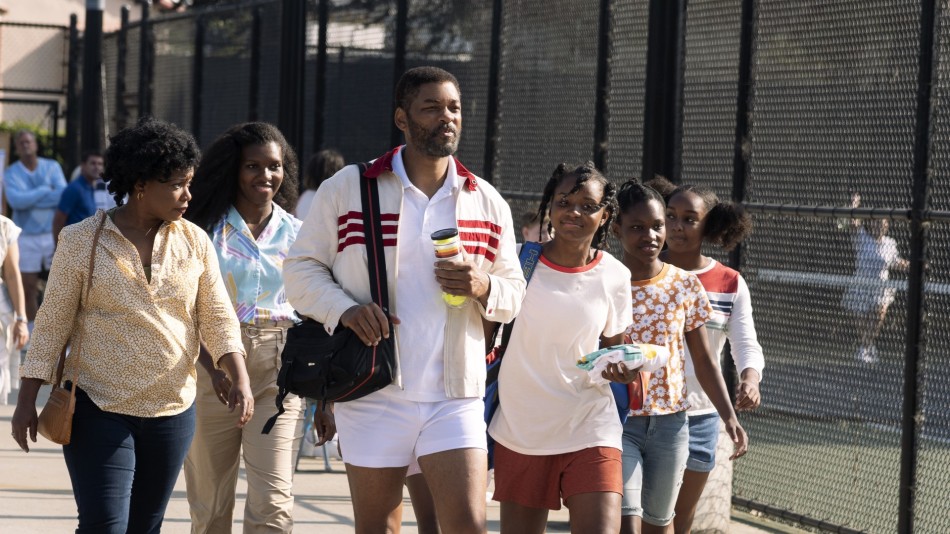 Two-time Oscar nominee Will Smith will most likely be taking another run at Oscar gold, for his portrayal as the ultimate tennis dad Richard Williams, in Reinaldo Marcus Green’s good natured biopic King Richard.

Smith depicts Willams as both charming and overbearing, with subtle prosthetics and a pitch perfect idiosyncratic southern drawl. The Academy is going to eat this up.

It’s certainly an extraordinary story. Richard Williams has a 78-page plan to turn his daughters, Venus and Serena, into tennis legends, against all odds. “If you fail to plan, you plan to fail,” he repeats like a mantra. He coaches his daughters from VHS tapes and nuggets picked up in magazine articles; they train on Compton’s neglected tennis courts, come rain or shine.

The movie centres on Serena and Venus’ final years in Compton, when Williams finally convinces Paul Cohen (Tony Goldwyn) to coach Venus in junior tennis tourneys, before the family move to Florida to be a part of the Rick Macci training program.

Smith depicts Willams as both charming and overbearing, with subtle prosthetics and a pitch perfect idiosyncratic southern drawl. The Academy is going to eat this up…

Producer Trevor White says: “Almost everything in the script is factful. I remember the first time I sent it off to my manager for a read, and he didn’t know the story really well. The first notes I got back were, ‘This all couldn’t have happened…right?’ ‘No, everything is really accurate.’ They had a pretty incredible journey, I think, in part because Richard is a larger-than-life character. It just felt like a unique, American dream story, and the big challenge for me was capturing some of these huge events and unexpected interactions.”

The final reel (no spoilers) depicts Venus’ first professional tournament as a fully fledged child prodigy. If you haven’t studiously followed the career of either Williams sibling, or tennis in general, you’ll find yourself gripped by the drama.

Green, who is attached to write and direct the upcoming Bob Marley biopic, holds his racquet lightly, but the pic isn’t schmaltzy. What ultimately earns the movie its ‘feel good’ sobriquet is the onscreen chemistry between Smith, Saniyya Sidney (Venus) and Demi Singleton (Sereena). There’s also a strong performance by Jon Bernthal’s moustache.

Technical chops are high. The score, by Kris Bowers, takes a uniquely literal approach to depicting the sport itself, and steers clear of histrionics. It’s all strings –  harp, piano, prepared piano and percussion.

The on-court drama is emphasised by the increasing ‘thwock’ of the ball as it rallies back and forth. Fun fact: the sound design of King Richard is by a guy called Richard King.

Cinematographer Robert Elswit (no stranger to Oscar, having taken the Academy Award for his work on Paul Thomas Anderson’s There Will Be Blood), perfectly captures the sense of time and place, (with appropriate nods to production and costume design). Will Smith spends virtually all his screen time wearing tight coaching shorts. House of Gucci this is not.

Costumes from BAFTA-winning The Favourite on display at Blenheim Palace

Costumes from the multi-award-winning 2018 movie The Favourite have gone on display at Blenheim Palace, as part of a spectacular new exhibition celebrating the life of John Churchill, 1st Duke of Marlborough. Created by the renowned British designer Sandy Powell, the costumes used in the black comedy are historically accurate, but have made from contemporary END_OF_DOCUMENT_TOKEN_TO_BE_REPLACED

In the new Downton Abbey movie, Downton Abbey: A New Era, Lady Violet Crawley, played by Dame Maggie Smith, inherits a spectacular villa in the South of France.  The gift, from a gentleman she once spent a few days with (ahem), is the perfect excuse to take the cast regulars on vacay. Carry on Abroad END_OF_DOCUMENT_TOKEN_TO_BE_REPLACED

Kirk Hammett, lead guitarist of Metallica, has released the first track from his upcoming debut solo EP, ‘High Plains Drifter’, music which he describes as taking an audio-cinematic approach. “They’re soundtracks to the movies in your mind.” The track opens the second side of Portals, the four-song EP out April 23, 2022 via Blackened Recordings END_OF_DOCUMENT_TOKEN_TO_BE_REPLACED