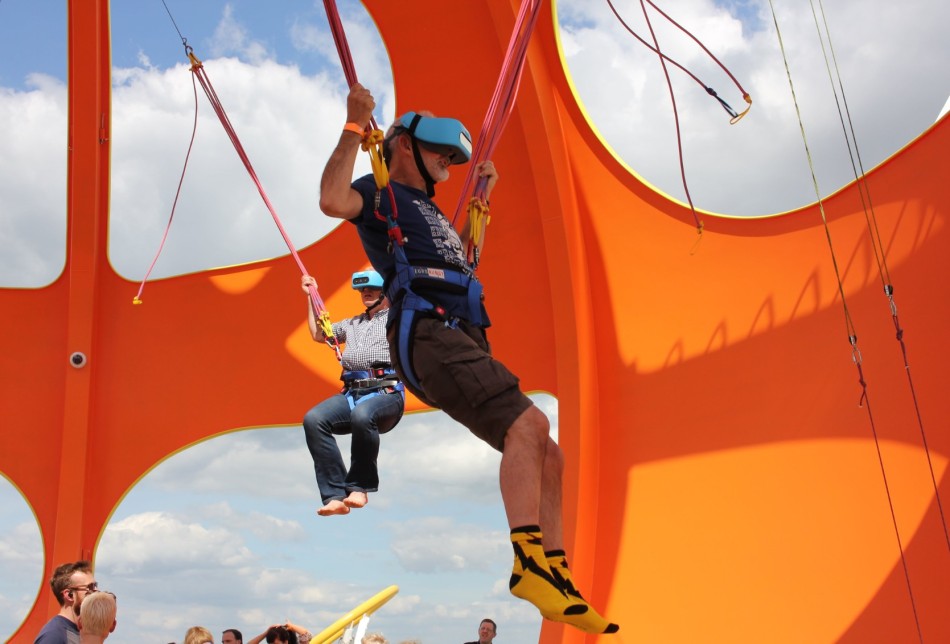 Virtual Reality may have stalled when it comes to home entertainment, but it’s finding a unique niche as an event attraction. VR rides are fast becoming a theme park staple, and now Royal Caribbean has gone one better and included the most audacious of VR attractions on The Independence of the Seas, as part of a multi-million dollar refit for the popular family ship.

The Luxe Review was invited to try it out – and it blew our minds.

The Sky Pad is the world’s first virtual reality bungee trampoline. One of the big new attractions on Royal Caribbean’s Independence of the Seas, it’s an extraordinary experience that’s a league apart from PlayStation VR.

The Sky Pad dominates the aft of the ship, a huge globe which houses four trampoline VR rigs. To ride it, you’re harnessed up and wear goggles. A guide encourages you to bounce ever higher (although in VR you’ll have no idea just how high this is), in order to take part in a number of games. Our VR adventure involved making our way through a cartoonish landscape, puncturing shapes above us and crashing into objects below. Every collision resulted in a colour explosion of sweets.

When you finally reach the end of the candy road, you’re asked to sink to your knees and the VR headset is released. It’s an exhilarating, entertaining experience that simply isn’t available anywhere else – and it leaves home-based VR for dead in the fun stakes.

The Skypad is just one of a number of new tech attractions on board the Independence. Other gadgety diversions include glow-in-the-dark Laser Tag and The Observatorium Escape Room. In the latter, players randomly enter this steampunk styled room and have an hour to unlock its secrets. The set design is superb; it’s like taking part in a TV quiz show.

If you want something a little more outdoorsy, there’s always racing waterslides, and Flowrider surf machine.

The Independence of the Seas is currently sailing around the Mediterranean. However, expect its Skypad VR experience to crop up on other Royal Caribbean ships in due course. It’s not to be missed.